The Revolt of Job at HKJFF

Home / The Revolt of Job at HKJFF 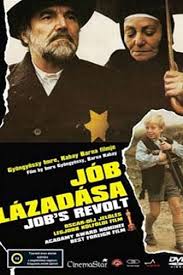 The Hong Kong Jewish Film Festival is held between 14-29 November.  The Hungarian film Revolt of Job is screened on the 22nd. The film nominated for an Oscar in 1984 depicts the Holocaust through the eyes of a child. In 1943, Job, the Jewish peasant farmer who has buried seven of his own children, adopts a Christian boy in order that there is someone to inherit his wealth and continue his culture. The Biblical tale featuring memorable acting by Ferenc Zenthe, Hédi Temessy, Gábor Fehér and Péter Rudolf weaves humour into the one year they spend together, during which Lackó is initiated into Jewish traditions, the beauty and the secrets of peasant life. Through a child’s wondering eyes, the viewer is faced with the unimaginable and shocking horror of the Holocaust as the adoptive parents are deported in 1944.

More about the festival here.